WGTA Presidents during the Mid-1960's

To give you a feeling for the political sentiments of the day, the following is part of an article written by P. Woodring (from the "Saturday Review") and reprinted in the May, 1967, "Newsletter of the WGTA."

"...In a great many of the larger school systems, communications between teachers and administrators have either broken down or were never established. There are many teachers from New York to California who even in 1967 fear their Principals, who look upon them as petty tyrants or at best bureaucrats who reject their (the teachers) professional leadership, and who would never dream of turning to them for advice and assistance. They fear the day when the Principal will come tiptoeing into the room during a class period to take critical notes that will become part of the teacher's permanent file.

"The younger and less experienced teachers do, of course, need supervision and assistance, but "snooper vision" -- the occasional stealthy visit of a Supervisor or Principal who drops in unannounced -- is not supervision.

"...So long as administrators continue to look upon teachers as subordinates and employees rather than as professional colleagues, the teachers will continue to look upon administrators as employers and as their natural opponents. When frustrated, they will organize against their employers, making use of all the techniques available to employee groups, including strikes."

In these old publications we still see a lot of the social functions that the WGTA enjoyed, but we also begin to see the changes. We begin to see the WGTA go from an organization that submitted requests to the Board -- to a union that now has the right to bargain for teachers.

The movement towards unionism was written in an article called "The Wind Is Rising." The WGTA member that wrote the article in 1967 did not attach his/her name to it, but it shows the frustrations that teachers faced. The author wrote:

"Many administrators and board members are reluctant to relinquish any of their authority, thereby fanning the flames of dissatisfaction on their faculties. Administrators especially are prone to control every facet of administration and overlook the fact that every member of the school faculty has at least a bachelor's degree and just might have some ability if given a chance to demonstrate that ability.

"...Ask yourself this question: When was the last time my professional opinion was asked by my administrator? ... Teachers are in a good position to know what is best for a school district -- not part time board members or administrators who have not been in the classroom for years." 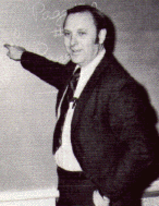 Our next bits of information come from the January 1966, "Newsletter of the WGTA." Clyde Ohl is the President and writes that his platform includes "an end to interruptions which cut down on teaching time, an effective teacher voice in policy making, and an adequate and equitable salary schedule."

He went on to announce the adoption of a comprehensive medical insurance program. He writes, "The idea was first introduced (to the Board) by the Teachers' Association four years ago (1962) and was reintroduced each subsequent year." The District paid 100 percent of individual coverage and 0 percent of dependent coverage. The premium for dependent coverage was $18 per month ($216 per year).

In an editorial, President Ohl said "teachers are one of the best educated groups in the nation today. To expect this well-informed group to sit on the side lines when the politicians are making educational and political decisions is both impractical and ridiculous." Mr. Ohl later became principal of the high school.

The last step in the grievance procedure in 1966 was as follows: "If the aggrieved teacher is still not satisfied, he may have a final hearing and determination by the Board of Education." There was no binding arbitration before the American Arbitration Association in those days. In 1966 there were 360 teachers in West Genesee, 12 of whom were not members of the WGTA. Dues were $4.00 per year.

We have a number of publications put out by the WGTA in 1967 when Bill Clark was President (Bill was later to become Vice Principal at WGMS). It was in that year that the Taylor Law was passed, giving teachers the right to unionize and bargain collectively with school districts. This is also when some of the "ugly" parts of the Taylor Law came into being, such as the 2 for 1-strike penalties (2 days loss of pay for every 1 day out on strike). Bill Clark summarized the situation when he wrote "this will be the most important year in the young life of the WGTA for many years to come. Now that the Taylor Bill is a law, it is up to you and your fellow colleagues to help augment the Professional Negotiations Committee."