The History of the WGTA 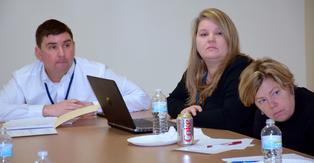 THE HISTORY OF THE WGTA
WGTA OFFICERS BY CONTRACT
CONTRACT HIGHLIGHTS

In a WGTA newsletter written years later, Union President Clyde Ohl stated "teachers are one of the best educated groups in the nation today. To expect this well-informed group to sit on the sidelines when the politicians are making educational and political decisions is both impractical and ridiculous." He also wrote that he was committed to his platform that included “an end to interruptions which cut down on teaching time, an effective teacher voice in policy making and an adequate and equitable salary schedule.” Clyde's words were written in 1966, almost 50 years ago!

Ironically, these words from the WGTA archives ring as true today as they did 50 years ago.

To read this article in it's entirety, mouse click on the link below.