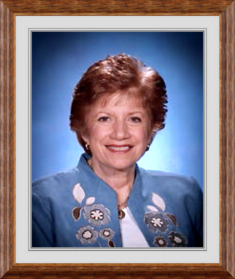 Download a copy of the Scholarship information presented on the right. 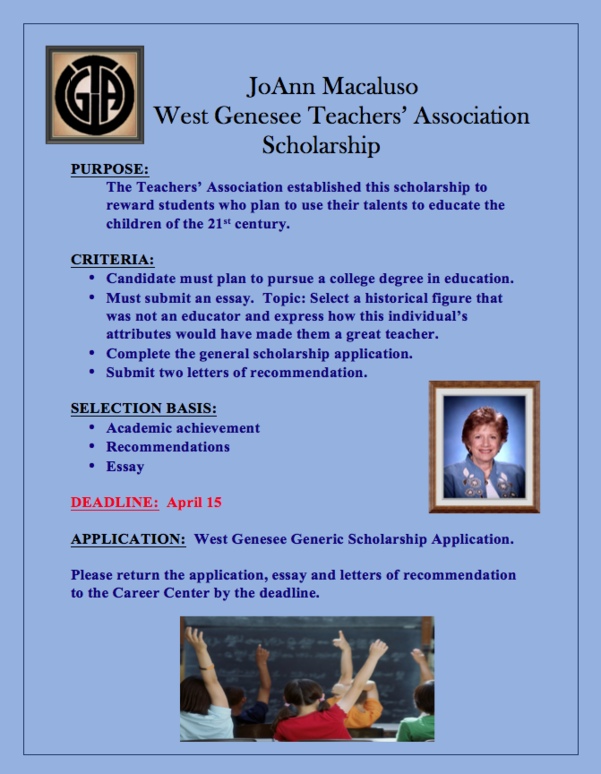 In addition to submitting the WGTA Criteria to the right, please download and complete the West Genesee General Scholarship Application available by clicking on the button below.

The application information for the JoAnn Macaluso WGTA Scholarship is now available on the website. Please mouse click the button below.

COPY OF THE WGTA  CRITERIA

A Tribute to Jo Ann Macaluso, A Dedicated Teacher, Kind Friend, and Mentor

In September 2015, the West Genesee school community lost a long time teacher, colleague, and friend, Jo Ann Macaluso, unexpectedly. During her tenure, she became a role model for countless students, a beloved friend to her colleagues, and a friend to families in the area. Macaluso was a graduate of SUNY Oswego, where she received her Masters degree in Reading Education. After completing her student teaching at Onondaga Road Elementary in the Fall of 1967, she was offered a permanent teaching job at the school. Her lifelong career of teaching began January 1968. She was trained in the Weehawken Writing Program, from Weehawken, NJ. She then trained every elementary teacher in the district the Weehawken Writing Program. Jo Ann taught there until 1987, when she moved over to West Genesee Middle School as a sixth grade Social Studies teacher on the W team.

While at the West Genesee Middle School, Jo Ann was named Teacher of the Year, a most well-deserved recognition for such a dedicated teacher. Always thinking, always planning ahead, Jo Ann would transform her classroom into an African village complete with huts, trees, and live fish. Her most well-known project was the Greek games held each spring at the middle school. Each sixth grader participated in the games, learning about cooperation and fair play as they played. She always put the interest and well-being of her students first.

Before the 2015 school year began, Jo Ann was in her classroom preparing for the year ahead. She visited with her colleagues, but more importantly she was there to get her room ready for the new school year. Sadly, that would be her last time in the classroom.

On September 17, Jo Ann passed away peacefully and unexpectedly at Strong Memorial Hospital in Rochester, New York, where she was being evaluated for newly diagnosed heart conditions. As a friend, colleague, and mentor to many, she will be missed. However, her memory will always be alive in our hearts.