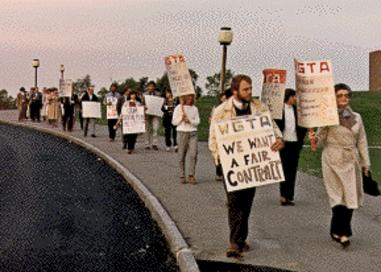 In 1981, in an effort to raise the educational standards in New York, the Regents Competency tests were started.

In June 1980 the WGTA held a golf outing at Westhill. According to "The Member Ship," "The highlight of the competition was a booming shot by Jack "Golden Bear" Isbell on the 168 yard par 3, 7th hole. The crowd was brought to its feet by Jack's pulled 6 iron shot -- that landed in the parking lot. We won't say he hit anything, but was that red paint on his golf ball? (Note: By next year Jack promised to straighten out his 6 iron or increase his homeowners insurance -- whichever is easier.)"

Ironically, 6 years later, on the exact same hole, Jack hit another 6 iron into the same parking lot, and hit another red car. Apparently it was easier for Jack to increase his homeowners insurance than straighten out his 6 iron.

In 1982, after extensive lobbying by NYSUT, the Tribourgh Bill was passed by the state. This bill forced school districts to continue all the terms of an "expired" agreement until a new contract was negotiated.

In January 1983 Mel Taber was appointed WGTA Vice President for Grievances, a position he held until his retirement in June 2002.

In October 1983 the National Committee on Excellence in Education was quoted as "hailing merit pay as a means to provide increased compensation for 'superior teachers,' a solution to the problem of future teacher shortages, and possibly a means of saving money." After years of experimentation in many districts around the country, merit pay was found to have fatal flaws and was widely abandoned.

In 1985 the West Genesee teachers rejected a tentative contract agreement that was reached between the WGTA and the district. Super conciliation was declared (the last stage in a crisis situation where a strike is imminent) -- but last minute negotiations provided an agreement. The contract was passed on the second ratification vote.

Also in 1980 a NYSUT teacher survey found that the "highest stress-producing factors were: managing disruptive children, followed by incompetent administrators - lack of administrative support, maintaining self-control when angry, overcrowded classrooms and the first week of school. The least stressful - students dropping a course."

In February 1980 the average New York teacher was 38 years old, had a Master's degree, had taught for 12 years, and averaged $18,500 per year. Also in February NYSUT held it's first Committee of 100 meeting in Albany. 280 teachers from across the state converged to lobby legislators for an increase in state aid. The Committee of 100 now numbers around 700 participants and lobbies in Albany once or twice a year.

In March 1980 the NYS Board of Regents mounted an attack on teachers and public school systems when they attempted to institute a teacher disciplinary system which could destroy tenure, mandate in-service education as a requirement for holding a teaching license, test all current teachers for 'competency,' and exempt private schools from these licensing requirements." Fortunately, none of the proposals were enacted.

The cost of living in March 1980 was 12.3%. Thirty-seven percent of the West Genesee teaching staff (137.7 teachers) were beyond the last step of the salary schedule.

In January 1980 WGTA President Patricia Ryan wrote, "Many times when a problem arises, Dr. Moores (WG Superintendent) agrees with or can at least sympathize with the position taken by the WGTA. However, he will not interfere in the running of a building if he sees the problem as one, which should be worked out within the building and not through the Superintendent's Office. Principals desire and should have a certain degree of autonomy within their building just as teachers desire and need autonomy within their classroom."

An advertisement in The Member Ship offered 7 nights / 8 days in Hawaii for $849 and the credit union interest rate on a regular savings account was 7%.

At the December 2, 1986 West Genesee Board of Education Meeting, board member Mary Clark stated, "I am against (teacher) tenure. I feel that any teacher who does their job shouldn't feel they need protection. I guess I am just against the concept of tenure." A number of ardent supporters of the teachers in the West Genesee District wrote letters to the editor (of the "Camillus Advocate") complaining of this apparent malfeasance of duty since as a Board member, Mrs. Clark was sworn to uphold the tenure laws. Perhaps not coincidentally, Mrs. Clark subsequently lost her reelection bid.

In 1986 the School Board eliminated the Middle School Department Chairpersons. The "official" reason was cost cutting; the unofficial reason was that union officers held too many positions.

On July 1, 1987, Dr. Rubeis becomes the West Genesee Superintendent -- and the job of WGTA Vice President for Grievances took on a new meaning.

In June 1987, WGTA President Cynthia Lush wrote, "Looking back I can say that my first year in office has been an eye opening experience for me.... On the minus side I must point to the frustration and indifference encountered with our Board of Education and our Administrators. I found especially grating the fact that many decisions were made without our input, and when we did come forward with our opinions we were ignored."

By the beginning of 1988 the WGTA had filed 10 grievances. In a February 1988 editorial the WGTA stated, "In any district when the communication channels break down one of the first things that happens is an increase in the number of grievances. We have had more formal grievances in the last two years (1986-88) than we have had in the sixteen years between 1970 and 1986. It is the sign of a troubled district when the only means of communication with the administration is through the grievance procedure. ... As for teacher empowerment, the district doesn't even know what the words mean. The district has, in the past, bypassed the EDC, ignored suggestions from the chairpeople, and now wants to disable the Superintendent's Liaison Committee. It appears that the district is trying to do everything possible to remove teachers from any decision making roles."

In September 1988, fourteen months without a contract ended when a tentative agreement was finally signed. The starting salary for a West Genesee teacher with a BA was $22,282.

By September 1989 the WGTA had filed 44 grievances -- and won most all of them. Also in 1989 the Carnegie Task Force on Education of Young Adolescents recommended that districts, "create small communities for learning, teach a core academic program, ensure success for all students by eliminating tracking, institute flexible instructional time and adequate resources for teachers, and empower teachers and administrators to make decisions about the experiences of middle grade students." 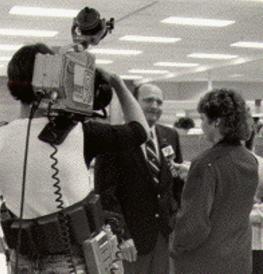