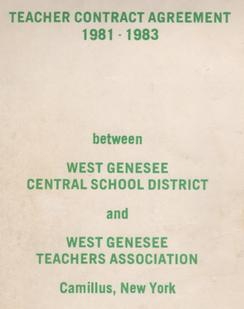 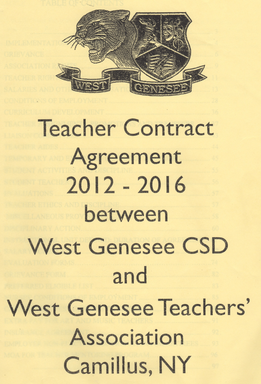 Prior to 1967 teachers were not allowed by law to negotiate a contract with the district. Teachers accepted what the district offered or they left the profession.  There was no grievance procedure, no sick bank, no uniform prep-time for elementary teachers, no 30-minute duty free lunch, no dental insurance or pregnancy disability, the district only paid 50% of health insurance costs … and the list goes on.

In 1967 New York State made it legal for teachers to form unions (via the Taylor Law), and the WGTA was authorized to negotiate with the district for salary and benefits. Between 1968 and 2014 the WGTA has negotiated twenty contracts.  We have been building, for these past 47 years, a framework for the future. The struggle to win the rights and protections that we now take for granted did not come easily. There was a lot of marching around in the rain and cold, the carrying of posters, picketing Board of Education meetings, manning the crisis centers, working to rule, strike authorization votes, grievances, arbitrations, conciliation and super conciliation with the American Arbitration Association, and many all night bargaining sessions. Over the past 50 years the WGTA has filed over 130 grievances against the District for perceived violations of the contract … and won most of them.

Writing in an editorial, WGTA President Clyde Ohl stated "teachers are one of the best educated groups in the nation today. To expect this well-informed group to sit on the sidelines when the politicians are making educational and political decisions is both impractical and ridiculous." He also wrote that he was committed to his platform that included “an end to interruptions which cut down on teaching time, an effective teacher voice in policy making and an adequate and equitable salary schedule.” These words were written in 1966, almost 50 years ago!

Ironically, those words from the WGTA archives ring as true today as they did 50 years ago. Today Public education is under attack by politicians and big business. A lot of money is spent on public education.  The allure of those funds has drawn the attention of big business, eager to get their hands on this money to pad their financial balance sheet. Big business has used campaign-funding laws to enlist the help of certain political parties that are more than eager to have schools run like corporations. Unfortunately the goal of big business is not to increase the quality of education, but to drain needed financial resources away from schools and children and into their own ledger books.

Standing in the way of this corporate take-over are teacher unions. As the flaws in corporate take-overs are exposed, and criticism builds, business and politicians have taken to attacking teachers and their unions. According to Diane Ravitch, “If scores are low, the critics say it must be because of the teachers' contract, not because the district has a weak curriculum or lacks resources or has mediocre leadership. If some teachers are incompetent, it must be because of the contract, not because the district has a flawed, bureaucratic hiring process or has failed to evaluate new teachers before awarding them tenure. These critics want to scrap the contract, throw away teachers' legal protections, and bring teacher unions to their collective knees.” - See more at: http://www.aft.org/periodical/american-educator/winter-2006-2007/why-teacher-unions-are-good-teachers-and#sthash.o70E7SEa.dpuf

Tenure is often blamed as the reason why a few schools fail. Critics say tenure guarantees a “bad” teacher a job for life. Nothing could be further from the truth. Tenure is a legal process that guarantees a teacher cannot be removed from their job for frivolous or unsubstantiated reasons. Tenure is basically “innocent until proven guilty” protection for teachers, and unions are essentially the “lawyers” for teachers.  Tenure hearings are the judicial process where impartial hearing officers judge accused teachers.

Why do we need tenure? There were times when married female teachers were fired when they became pregnant, experienced teachers were let go because a school board member’s child wanted a teaching job, or coaches were fired for not playing a board member’s child. Unions provide teachers with tenure protections and benefits that ensure this type of behavior does not occur. In addition, teacher salaries are $50,000 or more per year because of the union; teachers enjoy a large portion of their health, dental and vision insurance paid by the district because of the union; teachers have sick days and personal days because of the union. In West Genesee the district provides these benefits and more because of the 20 teacher contracts negotiated by the union since 1968.

If you want to know what your union has done for you, read the teacher contract. That document is the culmination of 50 years of negotiations between the teacher’s union and the district. It is the end result of hard fought collective bargaining where thousands of WG teachers sacrificed a tremendous amount of time, energy, and money so you can enjoy the protections and benefits you have today.

YOU are the union … and the union is YOU.  Attacks against teacher unions, tenure and pubic schools are rebukes against YOU. History has shown that the protection that unions provide to teachers today is as essential as it was 50 years ago.